A Pilot Poetry project in Four Hull Schools: May 2017

This year, 2017, National Poetry Day will be launched from Hull, in honour of its status as city of culture. Hull, with its proud abolitionist history, via celebrated son William Wilberforce, is also behind this years NPD theme: Freedom.

I was invited by Susannah Herbert of National Poetry Day, to assemble a team of poets, and work with NPD manager Andrea Reece, to roll out a four day poetry extravaganza in Hull for primary children, ahead of the day itself in late September.

The idea being that the children of Hull could lead the way in showing how freeing it might be to work with poets, and find poetry of their own to explore and document their ideas and feelings, and the world around them. We prioritised getting a wide cross section of voices and styles so that the students would discover that there are all kinds of poets, and many different ways to work creatively with language.

Schools and children up and down the land could then follow suit, and be inspired and empowered by the poetic imagination revealed in Hull!

Ian Reed and Roisha Wardlaw of the Hull 2017 No Limits education programme helped us set this up and with their support we rolled into town.

In April we made a trip to meet and work with teachers from the schools that had elected to take part. Andrea and I spent a great day with them where they found themselves unselfconsciously writing poems, playing a game of poetry lucky dip, practicing choosing and reading newly discovered poets work aloud to each other, and arranging image and text together in their own spontaneously evolving artists’ books.

Before the teachers workshops we had a day to look around Hull, meet some young artists and poets from an organisation called Ground and also go to a book launch at the university where we met tutors and students of creative writing, and heard two poets read, one of whom, Sarah Stutt, seemed like a good fit for our schools programme, so we invited her to join us.

Two weeks later Andrea and I returned with our crack team of poets, Kate Fox, Chris McCabe, Shazea Quraishi and Joseph Coelho, and my flag like timetable to unfurl each morning beside the kippers of the friendly Victorian Kingston Theatre Hotel. 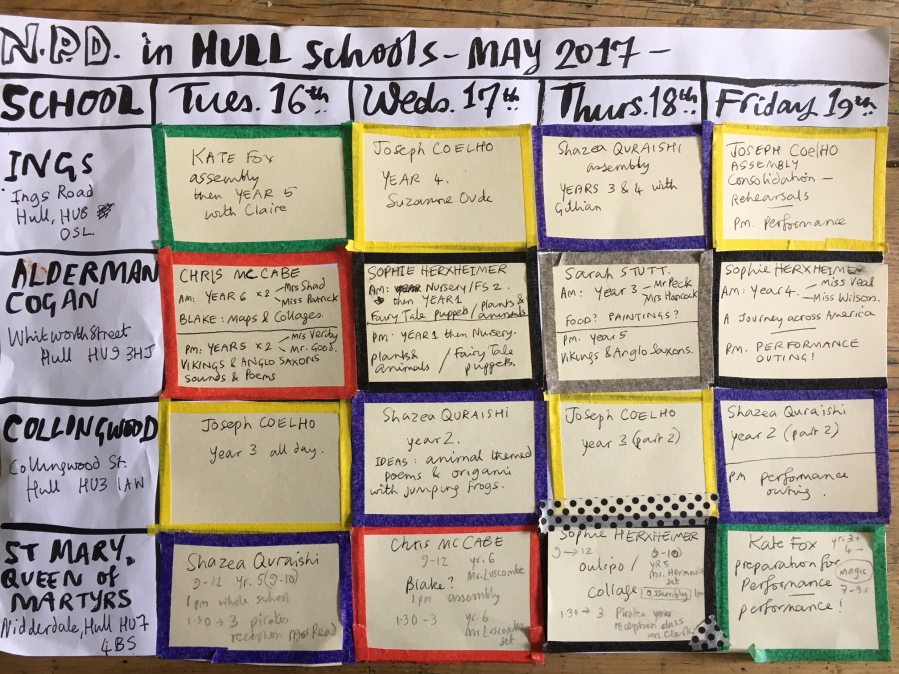 Some of the teachers/schools had proposed themes for our workshops as well as the overarching theme of freedom, and all had made plans as to how to best deploy each poet to the right year groups and classrooms. It was interesting to note which workshops were most effective, and not surprisingly, there’s a lot to be said for spending a whole morning or a day with pupils on reading and making poems, rather than zipping through at speed. Assemblies were a good way to gather everyone in school under the poetry umbrella, we all did whole school assemblies which were an important part of the week, and allowed for introductions… below I’ll just give a few examples of workshops that I was part of.

At Alderman Cogan School, year 5 were looking at the Vikings and Anglo Saxons, and I joined Chris McCabe who had devised an inspired class on sound poetry, playing the children recordings of Old English, Dada poetry, and Edwin Morgan reading his Loch Ness Monster’s Song. (‘Yes, you are definitely allowed to laugh!’) Everyone had a great inventive time making up a script for Beowulf and Grendel in contrasting modern English and monster sound poetry… this scroll was made by a girl called Georgie after school, she came and showed me the following day, what a star.

Another brilliant child made a whole sound poem book, also in his own time, and not only came to show me, but read from it with real flair at the childrens public poetry performance held in Hulls Jubilee Hall on the Friday.

It felt like poetry luxury for me to work for three whole hours with one class at Saint Mary Queen of Martyrs. Year 5 wrote Oulipian anagram poems and made their own books. First we looked at all the words we could get from SAINT MARY QUEEN OF MARTYRS, and pooled our findings on the whiteboard. The students discovered rafts, serenity, men, mountains, nutters, mum, sun, rain, tents, roses, a sister… and much more.

I then taught them how to make a little foldy book from an A4 piece of paper, and we each made one, using precise folding and crisp, black paper. Black pages are hard to write on, so we had to use collage papers and light coloured pencils to make our words appear. I was blown away by the concentration, the sheer enjoyment of the challenge, the use of colour and language, and also the enthusiasm of the teacher, Mr Herman, who expected wonderful work from his class, and got it!

This double page spread seemed to offer profound insight on the domestic scene! It definitely struck a chord with me.

My Wednesday was insanely busy running six sessions with foundation stage at AC school; a high spot was the spontaneous creation of a commemorative frieze poem with a Reception class to celebrate the bike/scooter ride they’d just completed before my appearance.

When I asked them to tell me how proud they were, how sweaty they got, how tired – they came up with original similes that were pure poetry. I wrote 15 of these out in my swirly ink calligraphy on long strips of paper, and ran these underneath wider strips, on which I’d asked the children to draw self portraits on the vehicles they’d ridden.

Examples of what the children told me: “as sweaty as the sun,” “as tired as a tired horse,” “as proud as a bee that had stung 109 people and then died,” and a wonderful image from a boy who hadn’t found a bike or scooter, but had done the circuit on his legs: “I want to go to sleep as cosy as a basket of eggs.” For the full effect please imagine that distinct Hull accent shaping the words. I was totally charmed.

With the smiling help of their teacher, Ms Hodgeson, we displayed the poem as a frieze all the way round the walls, recreating that cycling round the playground look for indoors.

Shazea, Joseph, Chris, Sarah and Kate all told me great stories: of young poets finding their voices, children that normally avoided writing suddenly joining in, and other inestimably valuable responses. Us poets really enjoyed having colleagues for the week, and getting to read as well as eat together, and compare notes about workshops, school dinners and POETRY! Our reading in town on the Tuesday night at The Kardomah was a blast, we were joined by Joe Hakim, a Hull poet, and others who contributed via the open mic slot. One of the teachers who’d been most involved and helpful with our visit, Mike Goode, is also a poet, he got up and read  that night, inspiring. 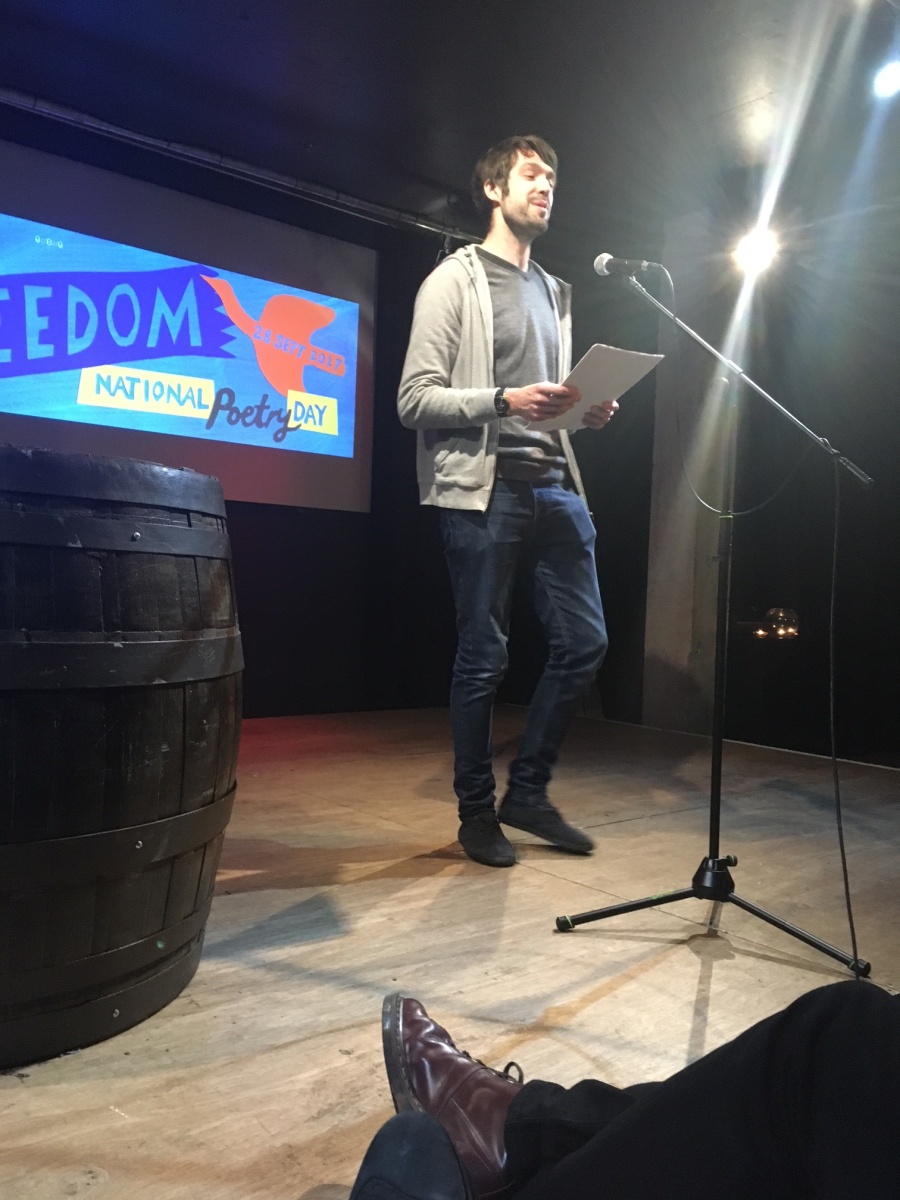 What an intense week: thinking, planning, teaching, reading, listening, performing. It seemed like everyone we met was excited to be a part of this, and to consider poetry as a vital part of everyday life. As this was now over a month ago I’m hoping that the ideas are still filtering through the minds of the children we met and wrote with… I know they’ll be buzzing around my head on a permanent basis now!

Thanks for having us, fab unforgettable Hull! 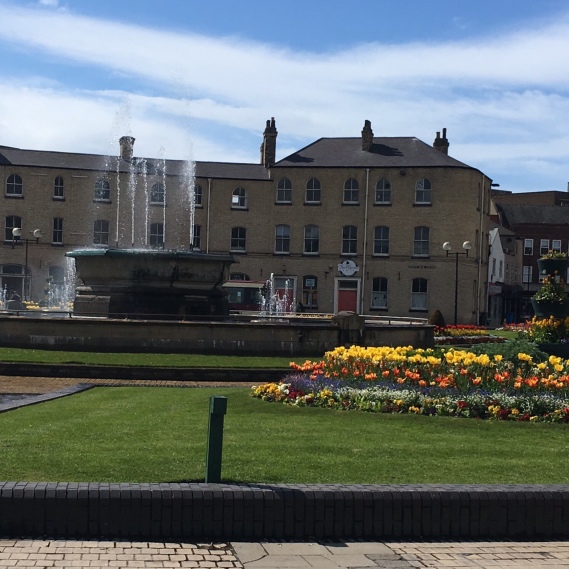 A Feast of Words

Free event with Shazea Quraishi, Ravinder Randhawa and me.

Do come and hear me and two fellow Brixton writers talking and reading at our local library on May 20th, 7-9PM. As well as reading new work, we’ll be talking about how Brixton and the library have shaped and inspired us and our writing.

We’ve been invited by Marilyn Rogers the chair of the friends group. There’ll be refreshments, time to chat and ask questions, space for library saving ideas!

Shazea’s new collection The Art of Scratching, has just been published by Bloodaxe Books.

Ravinder is the acclaimed author of many novels.

Looking forward to a bustling evening in the middle of Brixton!